Eskom’s crisis is not simply one of criminality and corruption. Rather, the organisation is in a storm of storms, where disruptions in one place (the resignation of a power plant manager, or a shortage of coal, or a boiler bursting) produce complex and unpredictable events somewhere else.

Are the new plans to unbundle Eskom enough to break what Rod Crompton earlier this year called Eskom’s “death spiral”? There are two major problems. Eskom owes more than R400-billion but does not generate enough revenue to pay even the interest on its debt. The less it sells the higher a tariff it needs and so the less it sells.

“I am in the dark,” he said. “I don’t know, because since [I was there] three years have passed, and the lights didn’t go off and then they went off.”

It is difficult not to laugh when reading that. At least since the publication of the Betrayal of the Promise report and, subsequently, evidence from the Zondo Commission, Brian Molefe himself has been identified as the key piece in the puzzle. He, with other Zuma cronies apparently captured the organisation and looted it in the name of radical transformation. If honesty and integrity are restored to the company, will it begin its slow turnaround? This certainly seems the current approach of government. Intuitively, it makes sense.

Is this what the data shows, however?

We have recently applied a new methodology, developed through a collaboration between South African and Eastern European scholars and professionals, to the study of state-owned companies in Russia, Brazil, Serbia, Pakistan and South Africa. It forecasts risk in public and private organisations. Using only organisational data available in the public domain (annual reports, financial reports, forensic reports, HR information) the results show a clear correlation between the politicisation of Eskom and the deterioration of the company’s performance. The data also shows a clear decline in engineering skills in senior management. We have come to expect these findings.

Yet, the data also produces some surprising results. We have developed a measure of know-how, which is a ratio of qualification and experience and gauges the capability of a staff cohort.

Below we have modelled the senior management. Note the shape of the black line (the dotted line reflects the years when there is no data). Know-how is at its highest at the height of State Capture. So are the number of executives with MBAs and those who have completed an executive course at Harvard or some other major US university. It was low during the electricity crisis of 2008 and is currently at its lowest point ever. Skill and experience cut both ways. You need them for things to work. You also need them to know how to manipulate processes and repurpose organisations. Notice how it has dropped again recently, indeed, to its lowest levels ever. Is this an unintended consequence of removing executives suspected of corruption, or of facilitating it? 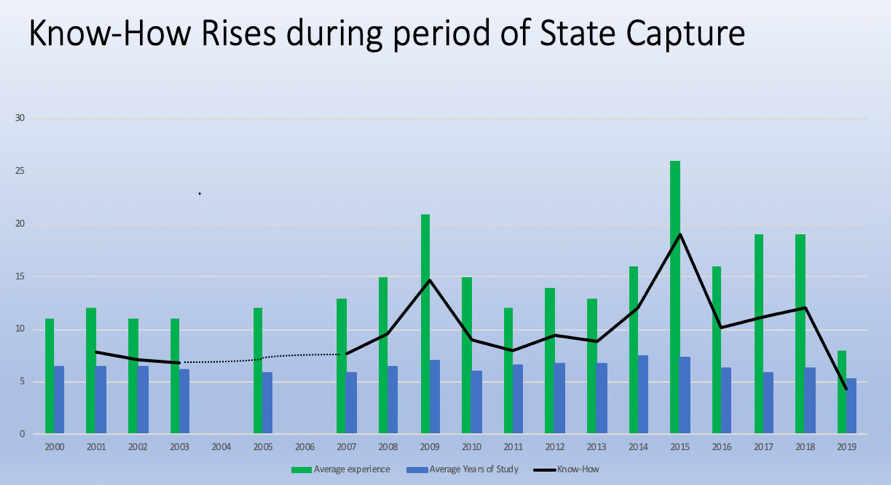 When we model what we call organisational turbulence in Eskom, things get really interesting. The analysis is done using a time-series algorithm that measures the stationarity and non-stationarity of given data. We have used information available from 1990.

In the graph below we can see the democratic transition as it played out in the policy environment at Eskom from 1992. It produces an initial sharp shock that slowly settles down. There is another shock in 2002. Note the shape of the wave. It has a high frequency and a short duration, followed by a period of stability. It is likely that 2002 represents the completion of the changes started in the early 1990s. We might say these waves describe positive change management interventions. Indeed, the breakthrough of the new methodology is being able 1) to model normal turbulence in an organisation and 2) to describe the shape of organisational change and 3) to predict its effect on performance.

In management, the transition at Eskom starts in 1991. Below is a modelling of the senior management function (the red line below). Note how the organisation settles from 1999. From 2007, however, something unusual starts to happen. In fact, the data record starts suggesting anomalies from 2005. When many commentators were still describing Eskom as a going concern, there was strong evidence of organisational decline. 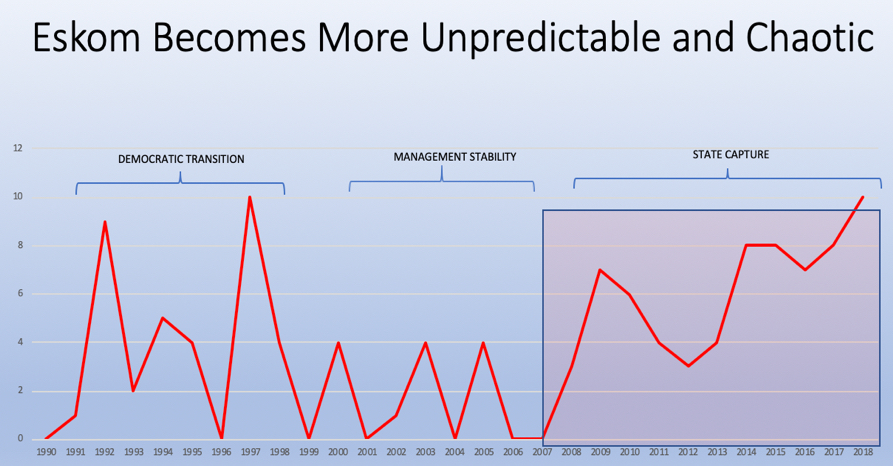 Every organisation has turbulence – it’s a bit like a pulse. It is important to be able to benchmark such a rhythm to establish what constitutes a normal level in order to detect something out of the ordinary. In the graph above, we can see that dramatic change, the democratic transition, reaches above eight on the index and then settles to a range around four. Positive dramatic change or a good shock has a particular shape. Organisational stability produces regularity in the series.

We can describe the shape of trouble too.

From 2007, the year that Jacob Zuma becomes president of the ANC, change in Eskom spikes. But it never settles down into a recognisable pattern or shape. The line becomes non-stationary, that is. When we model performance data at Eskom, especially electricity generation and sales, we see performance plateau and decline during this period. This is also the period when Eskom debt becomes unmanageable.

We will need to model other areas of the organisation to establish firm causalities. We do not have data, for example, at the level of the power stations. Anecdotally, however, they have experienced and are continuing to experience the same turbulence we have seen on the board and in senior management. The current dramas at Medupi and Kusile are typical in this regard.

Eskom’s crisis is not simply one of criminality and corruption. Rather, the organisation is in a storm of storms, where disruptions in one place (the resignation of a power plant manager, for example, or a shortage of coal or a boiler bursting) produce complex and unpredictable events somewhere else. Even if State Capture was the trigger that released wave after wave of disruption, Eskom’s problems are now institutional. An anti-corruption drive is a necessary condition of passing through the storm. But it is not sufficient for dealing with the company’s complex unpredictability.

More than anything the company needs to settle. A good place for policymakers to start is to know which parts of the company are more or less stationary and to identify where well-intentioned interventions will not have unexpected consequences.

The answer lies in the data.

This article was published in the Daily Maverick here